While walking in the street, I came across a concept that I did not know: clean-tagging " or " own tag In French ... But what is it?

The concept of a clean tag is, in fact, in several forms: 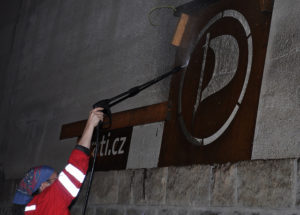 According to companies specialized in advertising of this type, the situation would be quite clear (when they approach the subject): if the chalk-tagging can be subjected to authorization, the reverse-tagging would be allowed if not prohibited .

What the law says

Tracing inscriptions, signs or drawings, without prior authorization, on façades, vehicles, public roads or street furniture is punished with a fine of € 3,750 and a community service sentence where only slight damage resulted.

The wording of this article is devilishly broad in reality: " Tracing inscriptions ...  ».

However, it is necessary that a slight damage results from these inscriptions, signs or drawings.

As a reminder, the word " registration "Finds its etymology in the Latin word" scribo Which simply means to write.

Therefore, how to say that the reverse-tagging would not be an inscription? or a technique to write a message?

The existence of slight damage

Concerning the "light damage", the people who use these techniques underline that no damage results from their inscriptions (even, on the contrary, since they wash the sidewalk) ...

In my opinion, if they can be right about the physical damage (and again), I'm not sure that their listings do not cause aesthetic damage to the public space (especially in the context of advertisements).