Is duplicating keys a crime?

From a theoretical point of view, we can ask ourselves if the simple copy of a key (found in the street, entrusted to us, etc.) can constitute a crime.

One might think that this copy is a kind of " flight ». Nevertheless, if you were given the key (because you had some work to do or you were renting the apartment), the criterion of fraudulent subtraction of the thing from others Does not seem to me to be311-1 penal code).

In any case, no offense is specific to the copying of keys of others.

[maj update = "07/10/15"] An informed reader tells me that the old penal code provided for a specific sanction for the reproduction of keys (399 old penal code repealed in 1994).

Nothing similar appears to exist in the " new »Penal code. [/ Maj]

Faced with this observation and the silence of the law, the manufacturers have imagined some devices to prevent the copy of their keys (and thus reassure customers).

The first of these devices is the use of patents.

Indeed, if a key contains a patent-protected element, any person who manufactures (L613-3 CPI a)) such a key would become a de facto infringer of the patent and could thus be condemned (L615-1 CPI) or criminally (L615-14 CPI).

The best known example of such protection is the key Radial Cowhide.

The moving part indicated above has (according to the patent which protects it, Patent EP0983411 B1) to make the manufacture of keys and the copy more difficult.

Indeed, using manufacturing tools " conventional "It is almost impossible to create this mobile part essential to the operation of the key and the corresponding lock.

Of course, this moving part also allows Vachette to have a monopoly of manufacturing these keys and to control the duplication of its keys.

First of all, it should be noted that a simple individual copying the key can not be pursued (L613-5 CPI at)). Only the locksmith (ie the professional) who has reproduced the key at the request of the individual can be continued.

In addition, the term of protection conferred by the patent is limited in time (ie 20 years from the deposit, L611-2 CPI). Then comes the question of the protection of the keys after the expiry of the patent ...

It is also conceivable to protect one's keys with the protection of designs »(L511-1 CPI).

A copying person (ie manufacturer L513-4 CPI) a key covered by this deposit would then be a counterfeiter and could be prosecuted (L515-1 CPI or L521-1 CPI) or criminally (mentioned in L515-4 CPI).

Some models of Vachette Radial keys are also covered by a model depot (model FR n ° 994929): 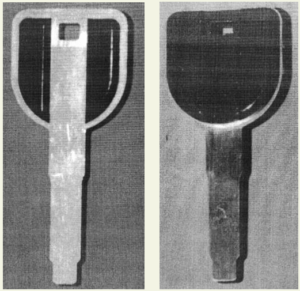 As for patents, it should be noted that a single person copying the key can not be prosecuted (L513-6 CPI at)). Only the locksmith (ie the professional) who has reproduced the key at the request of the individual can be continued.

Moreover, to be a counterfeiter, it is necessary that the copy the informed observer " a " overall visual impression »Close to that of the original key (L513-5 CPI). Therefore, it is relatively easy to substantially modify the key (especially in Non-technical ", Ie the part that is held in hand) to escape the model deposited.

In addition, the article L511-8 CPI however, provides that:

Not susceptible to protection:

1 ° The appearance whose characteristics are exclusively imposed by the technical function of the product;

2 ° the appearance of a product whose exact shape and size must necessarily be reproduced so that it can be mechanically associated with another product by contacting, connecting, placing inside or outside in conditions allowing each of these products to fulfill its function.

However, it is very likely that the appearance of the functional parts of a key (barrel, bit, etc.) is exclusively dictated by the function that is his, that is to say, open and close a particular lock. In addition, the appearance of these parts of the key must necessarily match the configuration of the pins of the lock so that the key and the lock function together. Also, it is to be feared that the shape of these elements can not be validly protected by a design.

Finally, as for patents, the protection is limited in time. The protection granted by the registration of a design and model is 5 years renewable up to a maximum of 25 years (L513-1 CPI): again the question of protection after the expiry of the model arises.

In view of the limited duration of protection of the other industrial property titles mentioned above, manufacturers have sought to protect their keys by means of trademarks.

Let's take another example from our friends Vachette. On their website, he tells us that their AXI'Home keys are protected by the filing of a three-dimensional mark.

This mark is supposed to reproduce the "V" of the Vachette logo:

In practice their key looks like this (the red line is only used to emphasize the outline of the section, because to be honest, it is difficult to distinguish it): 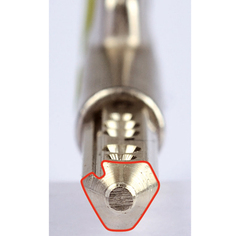 We can really ask ourselves if such a three-dimensional mark is valid.

To be valid, a mark must include:

In this case, I do not think that this is the case and I will detail each of these points below.

In introduction, it should be known that Vachette (or to be more exact Assa Abloy Limited) has also filed a Community mark No 004711669.

This mark has been refused by OHIM (see Decision of 21 August 2007 of the OHIM, R 0345 / 2007-2) because this office considers that the mark is devoid of distinctive character for the general public (Article 7 (1) (b), of Council Regulation (EC) No 40/94 of 20 December 1993 on the Community trade mark) which can not easily identify the mark applied for within the key :

The signs referred to in that provision are incapable of performing the essential function of the mark, namely that ofidentify the origin of the product or service, so that the consumer who acquires the product or service that the mark designates to make, at a subsequent acquisition, the same choice if the experience is positive or to make another choice if it turns negative [...]

In order for the public to be able to perceive a form as a distinctive sign, the form in question must have characteristics sufficiently unusual and extraneous to the field in question to strike particularly its attention. [...]

This form is described in the CTM application form, filed on October 26, 2005, as the reproduction of the "V symbolized VACHETTE". However, the Chamber considers that it is rather difficult to perceive this symbol in the mark applied for. The consumer should demonstrate a good dose of imagination and methodical analysis before he perceives any resemblance between the sign in dispute and the plaintiff's symbol.

Moreover, and in my opinion, this mark could also have been refused under Article 7 (1) (e) of the Council Regulation (EC) No 40/94 of 20 December 1993 on the Community trade mark (ie rejection if the mark consists exclusively of elements imposed by " the shape of the product necessary to obtain a technical result"): Indeed, it is a safe bet that, if the section of the key is modified (ie form of the mark), the key will not work in the lock (ie makes inoperative the expected technical result: the opening of the door).

Therefore, it is quite likely that the French mark FR n ° 3355870 is not considered valid by a French court if a thorough analysis is made (and in particular if the decision of the OHIM was put under his nose).

In the meantime, this brand remains in effect.

Vachette is not the only one to have filed three-dimensional marks to protect his keys.

Here is a small anthology of brands that I could find.

The Community Trade Mark No 8944183 from the TITAN company whose section writes overall »The name of the company: 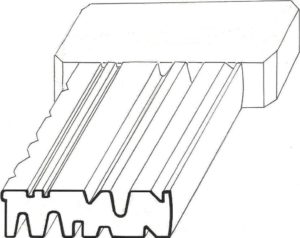 The Community mark No 013095039 from the company KABA (brand refused) which would make think of the Matterhorn mountain of the Swiss Alps (it takes a good dose of imagination to see it). 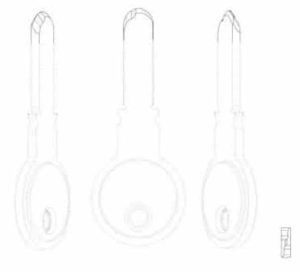 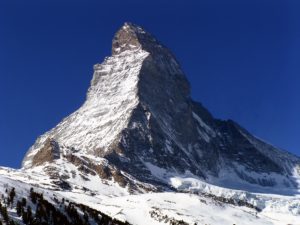 The international trademark No. W10707697 of the CES group (Ed. Schulte GmbH Zylinderschloßfabrik) whose section reproduces the name of the group. 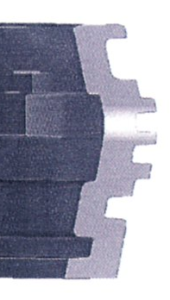 Section of the CES key

The brand FR n ° 3922536 or the brand FR n ° 3908341 JPM SAS company aims to protect the section of the key, I quote " which, taken in the reverse symmetry of the center and the upper edges, has an appearance that resembles the silhouette of the letters JPM (I'll let you look ...)

The section of the JPM key

In short, you will understand, I am relatively skeptical about the validity of such brands (see the criteria mentioned above).