The "Blockchain" for lawyers

If you do not know it yet, the Blockchain has been made popular by the cryptocurrency called "Bitcoin".

But how does the Blockchain work and how can it be used by lawyers.

The Blockchain has historically been created in 2008 to be able to set up the Bitcoin virtual currency (or cryptocurrency, because it relies on cryptographic mechanisms).

Nevertheless, the researchers found that the Blockchain could have many other applications.

The underlying principle of the Blockchain is to have secure information storage and transmission technology operating in a decentralized manner (ie without a centralized body, such as a central bank).

A Blockchain is, in a word, a great register that everyone can read / write, but that is impossible to erase and is indestructible.

How does it work ?

The idea here is not to explain the precise details of each element of the Blockchain, but rather to give you an overview.

We must first imagine a distributed database: 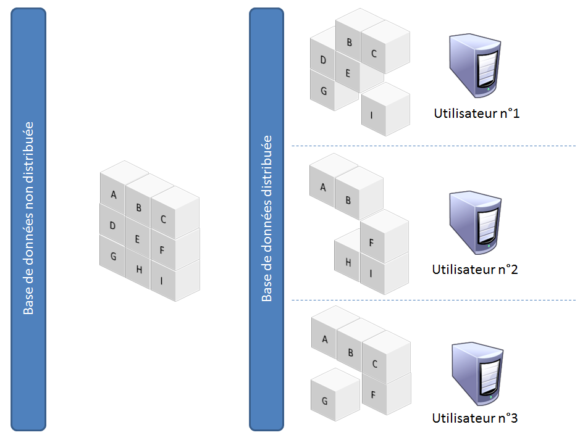 Principle of the Blockchain distributed bases

Integrity of the database

As you will have noticed, the data is at the user's ... so, how do you know if this user did not modify a datum of the database in a malicious way?

If the block B represents, for example, a sum of money of the user X and that this one requests its transfer to the user Y, how to know that it has not already transferred it to another user?

In order to avoid any malicious manipulation of the data, the Blockchain will use a principle called consensus.

Simply put, a vote will be held on the Blockchain so that everyone who stores Block B confirm that User X has the opportunity to make this transfer. 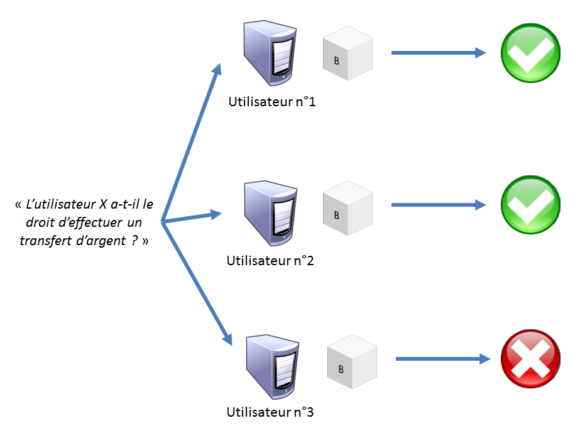 Principle of consensus in a Blockchain

Since a majority of users agree on this transfer, we will talk about consensus: the transfer will be authorized and registered in the database.

The difficulty is that the Blockchain system is a majority system. If a majority of malicious users exist on the network, the integrity of the database will no longer be certain.

Therefore, it is absolutely necessary to avoid that a person instantiates millions of "virtual" users in order to exceed 50% of the users of the network: one calls this attack " the 51% attack ».

To do so, it has been devised a simple way to avoid this massive creation of users: the idea is to limit the ability of network users to answer a Blockchain question by making the answer "expensive" to an algorithmic point of view.

To answer a Blockchain question, it is necessary to do a very complex computer calculation, which can take several minutes to solve (each user has a different problem). An answer is taken into account only if the answer to the question is accompanied by the correct answer to the computer problem: this mechanism is called "proof of work" (or "Proof-of-Work" in English). 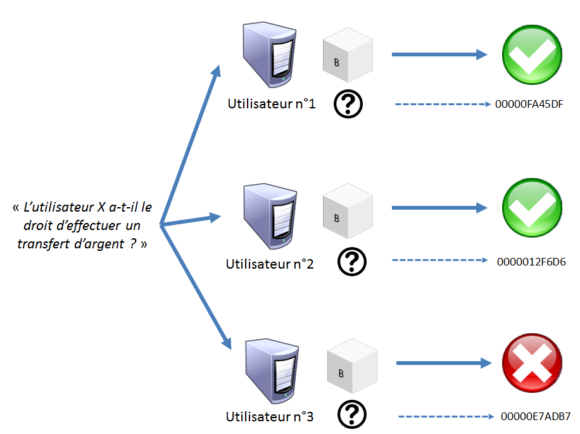 Principle of consensus in a Blockchain (with Proof of Work)

The "Proof of Work" mechanism is the mechanism implemented for the Blockchain supporting Bitcoin, but other mechanisms are possible.

For those interested, to solve the computer problem, it is necessary to find a string that can get a hash-256 beginning with a number of zeros (5 in the case of Bitcoin, but this increases in depending on the number of users of the Blockchain so that the average calculation time required is about ten minutes).

Thus, to succeed "the attack of 51%" mentioned above, it is not simply necessary to control 51% of users of the Blockchain mails must also have more than 51% of computing power.

In this decentralized mechanism, we can think that this system is free: in fact, no company manages the system and therefore there is no reason that it is paying?

Nevertheless, this analysis is wrong.

Indeed, to encourage users of the network to be numerous and to offer their computing power to reach a consensus, it is necessary to encourage them (financially) to do so.

Thus, when a user participates in the consensus mechanism, it is most often paid (in the case of BitCoin and Ethereum, for example): If you want to use the system, it will still be necessary to remove the door. change.

There are mainly two types of Blockchains:

If the first Blockchains were opened publicly in order to attract a maximum number of users and to make reliable the mechanism of consensus mentioned above, it is quite possible to create a private Blockchain whose users are restricted.

Nevertheless, if the number of users is very limited (eg a few tens or hundreds), the very interest of the Blockchain becomes debatable: a centralized structure may be preferable.

Recently, an environmental controversy has been raised against the Blockchain system used by Bitcoin.

Indeed, as we have seen, to reach a consensus in a secure way, a large number of users performs algorithmic calculations requiring a lot of power: these calculations have no interest except to increase the security of the system.

It has been calculated that the Bitcoin system could consume as much energy as Denmark by 2020.

We can ask ourselves if that is reasonable ...

After these long technical explanations, ask what the Blockchain can do for legal professionals

As we mentioned above, the Blockchain is a database which, a priori, is tamper-proof.

Since then, some people have imagined use cases by imagining the Blockchain as a computerized and reliable registry:

The " smart-contract Is the name given to a contract that can run directly in the Blockchain: it is a kind of program that runs automatically according to the terms of the contract.

For example, this contract may be a car rental contract:

The contract then runs automatically, without human intervention, via the Blockchain: it says that " the code is the law »(« code is law " in English).

Towards a revolution in our legal mechanisms?

If we listen to promoters of the Blockchain, the legal mechanisms we know will be revolutionized in the short term?

Personally, I understand that desire, but I do not think that is realistic.

Intervention of the magistrate

First of all, we have a problem of legal force of proof.

Indeed, if Blockchain promoters ensure its reliability, it is necessary to convince magistrates that the proof provided by this type of mechanism is reliable.

This is all the more true since it is impossible to provide a universal answer as to its reliability in view of the number of blockchains that can exist (public, private, large, restricted, etc.).

Given the technical complexity of the subject and its multiform aspect, I wish the courage to the person who will want to convince a judge.

On the other hand, in principle, the Blockchain is a majority system: will the judge be convinced because 51% of the people questioned said that the proof was valid?

It will therefore probably be necessary for the legislator to put its nose in this issue in order to give the rules to follow for the management / operation of Blockchains.

It is only on this condition that the evidentiary system may be modified / extended, as was the case with the electronic signature.

Will smart-contact replace the judge?

It may be that the expression " code is law "Gets rid of the issue of litigation: if the code says it is true.

Nothing is more wrong.

Indeed, like any contract, disputes will arise from the execution of contracts (ex. I did not do 435km as you claim, but only 245km). It will therefore be necessary to settle these disputes in light of the applicable law.

The end of money as we know it?

The question is whether financial transactions as we know them (eg with our bank cards) will be supplanted by the Bitcoin system.

As we explained above, in the context of Bitcoin, a transaction takes about 10 minutes to be validated (ie to reach the consensus of the Blockchain): these 10 min can not be reduced, because the security of the Blockchain is precisely a function of this long time.

It is therefore unlikely that Bitcoin completely replaces the Banks: no one imagines having to wait 10 minutes at a box of supermarkets so that its payment is validated.

In addition, the principle of the Blockchain is the fact that all users can read without restrictions all the information (or block) of it.

From then on, it's a little like if your bank account was public: everyone can consult it.

I'm not sure that mentalities are ready for that.

As mentioned above, some are announcing the end of national registration offices for industrial property titles such as the INPI.

It does not seem realistic to me.

In fact, the INPI does not have only a registration role: it examines, analyzes, conducts research, issues titles ... Therefore, the very existence of the INPI is not called into question by the simple fact that an alternative to data storage is proposed.

It is of course possible that the INPI uses the Blockchain to store information, but the question of financial profitability will necessarily arise (because I remind you that the use of the Blockchain is paying).

The Blockchain is a true technical revolution and it would be a mistake not to look at the benefits that it can provide us.

Nevertheless, this revolution also raises a number of questions about its use: legal but also environmental.