Home Practical cases The overtaking of trucks on the highway

The overtaking of trucks on the highway

Driving quietly on the highway at 130km / h, you are brutally blocked by a truck that doubles at 90km / h ... annoying, is not it? But is it forbidden?

To my knowledge, these trucks can be sanctioned in two very special cases only ... the rest of overtaking are certainly embarrassing, but not prohibited.

Lanes of at least 3 lanes

If you are on a lane of at least three lanes (ie 2 × 3 lanes or more), there is a special rule concerning the use of lanes by heavy goods vehicles.

In fact, for heavy vehicles over 3.5t or over 7m in length, they are forbidden to use other routes. than the two most right lanes (R412-25 of the Highway Code):

When a road has three or more lanes, assigned to the same traffic direction, drivers of vehicles whose total authorized laden weight exceeds 3.5 tonnes or of a combination of vehicles whose length exceeds 7 meters are prohibited '' take other lanes than the two lanes closest to the right edge of the road, except, as little as possible to prevent the normal running of other vehicles, to prepare for a change of direction.

To put it simply, heavy goods vehicles can use the routes indicated in this diagram: 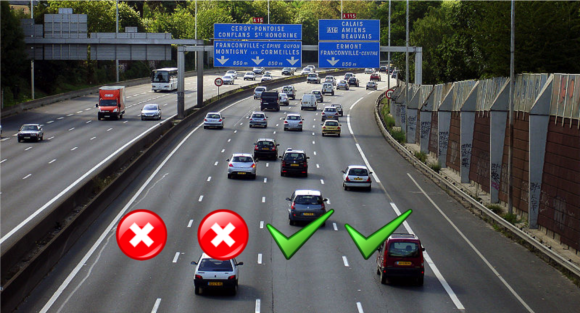 Failure to comply with this rule may result in a fine

When overtaking, heavy vehicles must be careful not to slow down other vehicles too much (in reality, this is also true for all vehicles).

As a reminder, there is no minimum speed on the motorway, but your speed must not, in any case, " interfere with the normal operation of other vehicles while driving for no good reason at an abnormally reduced speed »(R413-19 of the Highway Traffic Act). 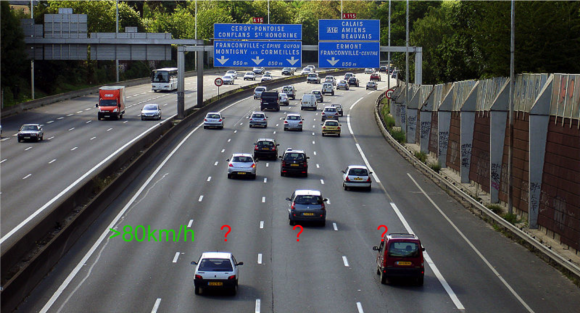