Are bread and water "carafe" free in restaurants?

By habit, when the customer does not want to pay for his drink, he orders " a jug ».

But is this gratuitousness a use or can the restaurateur charge it?

Water and bread during a meal

With regard to free water and bread, Article 4 of theOrder No. 25-268 of June 8, 1967 (in its initial version) indicated that the price of meals included the cover, and that the latter included:

From then on, the situation was quite clear: bread and water decanter could not be paid during a meal !

I reproduce below this article (because I find a certain nostalgia to read these old articles, with their breakage period): 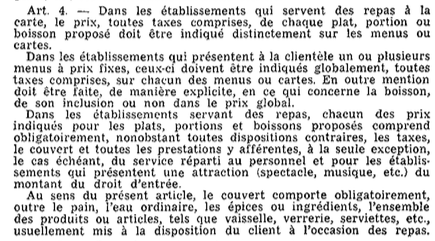 Today, the situation is less clear.

Would this decree be repealed?

Some people think so ...

To support their arguments, the proponents of this abrogation emphasize that:

Why this can be doubted

For my part, I really doubt this repeal!

Indeed, in French law, there are two repealing mechanisms:

Thetacit abrogation consists of the creation of a new law (not explicitly providing for repeal) but whose scope is inconsistent / contradictory with the old laws.

Water and bread outside any meal

On the other hand, the fate of water and bread consumed outside any meal is clearer.

There is no provision imposing to provide water or bread for free to a customer (especially if it does not consume).

Therefore, it is quite possible for a restaurateur / bartender to charge a glass of water (even if it contains tap water).

The only obligation he has is, as for any consumption, is to include his price on the menu (Article 3 of the Decree of 27 March 1987 or L113-3 of the Consumer Code).