Home Practical cases Can a scooter ride on bike paths?

Can a scooter ride on bike paths?

Anyone who has a scooter has obviously noticed that moving on bike paths drawn on the road can be a real plus to avoid Paris traffic jams ... But is this really allowed?

Apparatus authorized on a cycle track

But finally, a scooter could not it be considered a cycle? It has two wheels, so ... good ...

Unfortunately for you, the definition given in point 6.10 of the article R311-1 of the Highway Traffic Act do not leave too much doubt:

Cycle: vehicle having at least two wheels and powered exclusively by the muscular energy of the persons on this vehicle, in particular using pedals or cranks;

A scooter (or even an electric bike) will not be considered as a cycle ...

Definition of the cycle path

The bike path (or cycle lane) unfortunately has no very precise definition.

Article R110-2 of the Highway Code simply indicates that bike lanes are " exclusively for two or three wheel cycles "(And if not four-wheeled children's bikes, huh?" I shout at discrimination!).

But how do you make a "bike trail"?

Is it the simple fact of drawing a pictogram on the roadway that makes the track "cycle" or does it require an administrative decision taken by the town hall or the prefect? 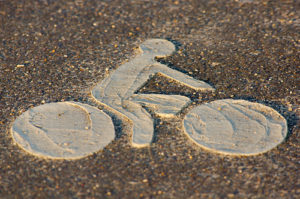 The fine in case of violation of this rule is then a contravention of the 2nd class (R110-2 of the Highway Code) is :

If the scooters can not, as a matter of principle, use the cycle tracks, " the authority vested with police power "(Ie the prefect of police in Paris or the town hall in the majority of the other cities) can authorize them to borrow it (R431-9 of the Highway Traffic Actsecond paragraph).

To my knowledge, in Paris, the prefect did not take such a measure: friends scooter, you are warned 🙂